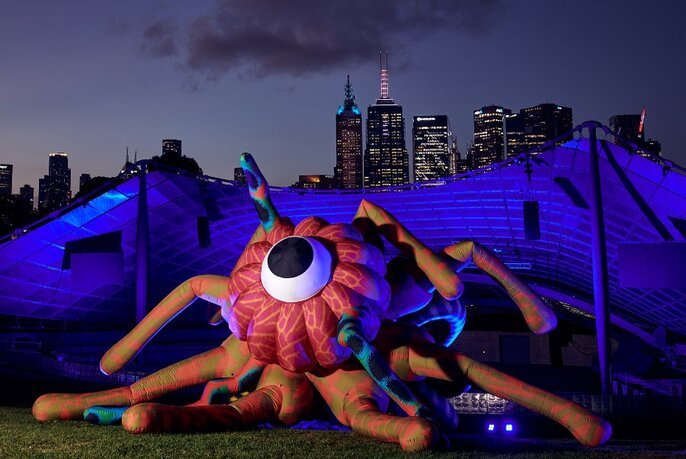 This sprawling, psychedelic wonderland – one of Rising’s biggest, most accessible attractions – is back for 2022. And after some careful thinking, it’s more animated, more alive, and even more worth your time. The evening sky is suffused with a faint kalei- doscopic light. Somewhere out of sight, a choir is belting out a familiar pop tune, the words not quite audible. All around you, a slow tide of rug- ged-up bodies shuffle out of the dark, like moths toward a flame. Anticipation is in the air. You round the back of Sidney Myer Bowl and catch your first glimpse of the visual ban- quet. Projections flicker across the amphi- theatre. A field of screens pulses with vibrant video. And masses of bulbous psychedelic crea- tures wave in the wind, their insides glowing gently. With their tentacles and lidless mup- pet eyes, the inflatable doodads could be from another dimension. This is The Wilds – Rising’s sprawling adult playground – rebooted, revised and reimagined for 2022. You’ve never seen the Bowl used to this extent, with the stage and back-of-house areas open for the public to explore. Last year the same site was a vast bamboo forest, complete with mirrored illusions, archi- tectural nooks, sculptures, video art, food and more hiding in its twists and turns. But one of Melbourne’s ubiquitous lockdowns closed the gates almost as soon as they opened. “Even though we were only open for five hours, I think we learnt quite a lot about just how massive that site is and, once you fill it full of humans, how it functions,” says Hannah Fox, Rising’s co-artistic director. “So we’ve evolved the design to be a lot more … animated, I guess is the best way to describe it.”